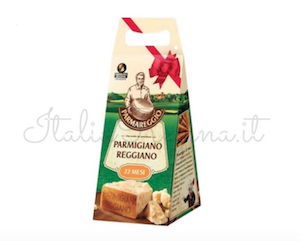 The production of Parmesan Cheese, Parmigiano Reggiano, takes place in the provinces of Parma, Reggio Emilia, Modena, Bologna, area in the region of Emilia Romagna, to the west of the river Reno, and Mantua, which is in the region of Lombardia, to the east of the Po River.

Parmesan cheese is a hard granular cheese, whose quality depends on the place of the origin, the natural feed and the high quality milk with no additives.

There is a long ageing process, in which the natural fermenting agents that are in the milk give the cheese its particular flavour and texture.

This cheese owes these special qualities not only to the milk producer but also to the cheese maker, who transforms the milk into the cheese and looks after the maturing process.

Unfortunately outside Italy the name Parmesan is often used for various imitations cheeses, although European law classifies the name Parmigiano Reggiano, as well as the translation “Parmesan”, as a Protected Designation of Origin status (PDO), in Italian DOP).

The legend tells us that Pamesan cheese was already known in the province of Reggio Emilia in  the Middle Ages.

There are historical documents of the 13th and 14th centuries in which Parmigiano Reggiano was described really similar to the product we eat today. In 1348 Boccaccio wrote in the Decameron about a “mountain, all of grated Parmesan cheese”, on which “dwell folk that do nought else but make macaroni and ravioli, and boil them in capon’s broth, and then throw them down to be scrambled for; and hard by flows a rivulet of Vernaccia, the best that ever was drunk, and never a drop of water therein.”

Nowadays Parmigiano Reggiano is commonly eaten on its own in a small pieces or grated over pasta dishes, stirred into soups and risottos. It is also often shaved or grated over other dishes.